But on this particular day (which of course was the day it was IMPERATIVE I was home in time) we were stuck in traffic . . . for 50 minutes.

The first 5 minutes were given over to
a) wondering exactly how long we might be stuck here (visibility was restricted and no obvious obstruction could be discerned)   and
b) growing frustration about dinner arrangements for the family.

Time truly was of the essence as Child No.1 at home was due at a Dress Rehearsal from which he would not return until gone 10pm.
Child No.2 (in the car with me) was due at a rehearsal for a concert he was doing with the rest of his class.
Husband was laid up in bed with so- far- undiagnosed- but- none- the- less- very- painful back problem.
Dog was probably just sleeping somewhere, so that wasn't an issue.

But it was all whizzing and whirring around in my mind - wondering how on earth I was going to get everyone sorted out and delivered in time and how could I possibly . . . .

We are stuck here for as long as it takes and that's all there is to it.

So I rang No1 and asked him to get himself a bowl of cereal for dinner.  He couldn't believe his luck.

Nos.2 and 3 set about salvaging months old Haribo that had broken loose in the glove compartment. (How many gloves do people need to store in their cars?  Those things are massive!  Or perhaps I have improbably small hands . . . )

Anyway . . . we sat and waited,  quite happily picking bits of jelly sweet from between our teeth, watching the world pass by.
A chap walked past with a pencil held behind his ear and we mused for many happy moments on how it must be quite difficult to write like that. No. 2 child piped up that the fellow must be 'right eared' and, at the time, we were quite breathless with mirth - although I realise now that may have had something to do with the fact we were sitting in our own recycled air.

Then someone, from not many cars behind us, beeped his horn.
Several times.

And I wondered how on earth he thought that could possibly help?

Did he perhaps think that the enormous queue of traffic was caused by people simply forgetting what they had got in their cars for?
Is it possible he believed that his thoughtful audible prompt would shake us from our stupor and jog our memories?

Perhaps he imagined that, all along the line of cars, drivers were clapping their hands to their forheads and crying, 'Why yes of course!  That is what I was doing!  Driving forwards!  How very, very silly of me.  Were it not for the sound of that horn, who knows how long I might have remained stationary?  Thank you, kind gentleman, thank you.'

Or maybe he'd simply fallen asleep while waiting and had landed on his hooter.

Whatever the answer, the kids and I hadn't laughed so hard in ages. 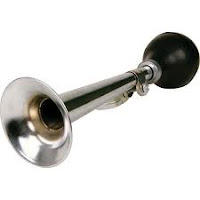 So for that, Horatio Hornblower, I salute you.