Easter in our house is not a major event like, say, Christmas or the World Cup, but it is quite a peaceful time for us all to spend a few days together; catching our breath after the barrage of birthdays that befall us twixt the beginning of February and the end of March.
﻿﻿
﻿
﻿
Easters at Grandma and Grandpa's are a tad busier - with country walks, decorating eggs with fabric scraps, flowers and onion skins (really, the results are lovelier than you might imagine), church on Sunday and an afternoon Easter Egg Hunt - before collapsing, completely exhausted and stuffed with food.

With my default setting being 'Basically Lazy', Easter at home is rather more centred around loafing.  Indeed, thanks to the generally relaxed atmosphere on Good Friday, it was 8pm before anyone even thought about dinner - and that, in the absence of any better ideas, consisted of a bowl of breakfast cereal each.

Easter Sunday is usually the busiest day because something actually happens.
Eventually, at least.

The kids wake up, bright-eyed and full of expectation eagerly awaiting signs of a delivery.  ﻿﻿
﻿
﻿

However, we no longer receive anything from the Easter Bunny.  Not sure why...

...but all is not lost!  For some years now we have been visited by the EASTER BADGER.

Yes, lucky old us.  He can be quite an aggressive fellow, mind you, but he has embraced modern technology and has taken to advising us when he's been via the medium of text messaging. 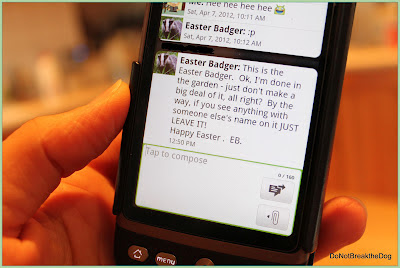 He leaves not just egg-shaped chocolate and other novelties - but also copious amounts of weapons-grade (I don't like it, not one little bit) sherbert.

Four fifths of the family are thrilled by this development as they consider sherbert one of the main food groups and lobby to have it count towards one of their Five a Day.  (Fruit flavoured kiddies, not the same as fruit.)

Once all the goodies have been garnered from the garden, we retreat indoors, quite weary from our egg-finding efforts.

Just enough energy has usually been kept in reserve to trough like starving piglets through much of the sugary-loveliness, until such time as the 'responsible' adults call a halt - lest the de-lovely dinner I am preparing should be ruined.

Which leads me slightly off subject...

We have in our house a magnetic sign stuck to our fridge, upon which we write the details of the day's main meal.  This came about because I have 3 forgetful children.   (I'm being generous, they aren't forgetful really - only if you count 'forgetting to listen to the answer').

So, tired of being asked ABOUT A MILLION TIMES A DAY what was for dinner - I employed this visual aid.
The kids have embraced it, and like to write the details up themselves - often including graphic, and sometimes disturbing, illustrations.

And so, to close this post - Ladies and Gentlemen, I give you Easter Sunday's menu board.
As drawn by Child No.3 - Daughter Aged 9.* 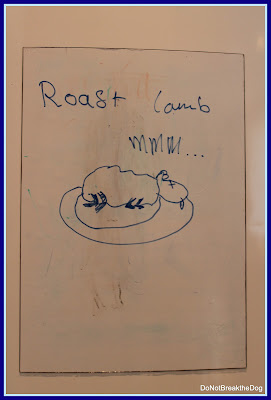 *With apologies to any vegetarians/readers of a sensitive disposition.