...Or, If you've read V.Woolf's book you may find this confusing Confession : I am the kind of person who sees a photo in the paper and, rather than actually read the article, makes up the story to go with it.
I just can't help myself.  I'm not dangerous though - I don't then pass on as fact the story I have just invented.  And if something really catches my eye I do read the whole article (or at least until the words get too long) so I am not a total heathen.

Perhaps it's a creative exercise (or urge) that I can't control.  I used to love it at primary school when we were shown a photograph of some gnarly feet, or played a piece of classical music and told to write what it suggests to us.

But moving on, dear reader, as I do have a point - although one I am meandering towards rather than taking the direct route.

Ooh!  No, hang on!  TITLES!  I need to talk about titles.  I love titles!  I used to write pages and pages of titles I'd made up.  Never got any further, but titles I could produce like nobody's business.
I can get almost as much pleasure just reading the titles in bookshops as I do from reading the book behind them. I Capture the Castle, The Curious Incident of the Dog in the Night Time, Pied Piper, The Night Circus (I've actually read all of these books which makes me feel pretty groovy).


One title that always appealled is Virginia Woolf's 'A Room of One's Own'.  And, wantonly revealing my ignorance to you, I have to admit that I have absolutely no idea what this book* is about.  The fact that it regularly gets mentioned in Serious Radio Programmes by Academic Sounding Folk suggests to me that it isn't, perhaps, about decorating a spare room on a budget.

I have oft been put off by Famous Books or Classics - as I imagine I won't understand them.  This is almost entirely silly because I have been able to read for over forty years and long ago mastered the intricacies of the English Dictionary.

But what I always imagined was that A Room of One's Own is about having a space that is yours alone.  Somewhere, large or small, that is just for you.
For your stuff.
Somewhere for you to think, or draw, or write, or dream - whatever rings your bell.


Which leads me on to My Corner.

I have recently acquired my Very Own Space and I cannot tell you how much pleasure it gives me.  It is entirely out of all proportion considering it only takes up a teeny corner (of what we still refer to as our New Room even though it is about 4 years old) and consists of a second-hand bar table and old school laboratory stool (try saying that before you've warmed up).

But it also has a window!

It's not like the kitchen table which has to be cleared for dinner, nor is it in the living room surrounded by stuff I should either be putting away or dusting or probably binning because I can't actually identify what it is.
I can leave everything out if I want to, or get stuff ready the night before so I can get straight on with it when I've done the school run.

The walls around me are white and the window lets in the most fabulous light.  I look out onto garden and sky and frolicking birds and it is just bliss.

And this is what I imagine a Room of One's Own is about. 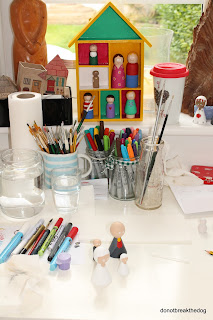 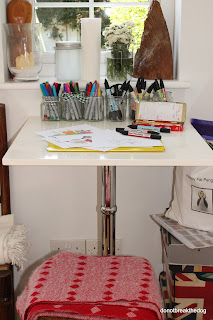 Just writing about it now makes me feel jolly. I might award my space an English Heritage Blue Plaque.

Kate W Sat Here and Felt Jolly
(sorry, you are going to have to imagine the blue plaque - my natty photoshopping turned out to be an epic fail).


But for now, what I think I probably ought to do is read A Room of One's Own - and find out what it is really about.


Or at least read the synopsis on Amazon :o)


*I have since discovered that it is an 'extended essay'.  Whatever that is.
Posted by Do Not Break The Dog at 12:47