It's been haircuts all round in our house.  Well almost all round .  The dog was done on Monday, and the Daughter and the No.1 Son were done yesterday.  (I hardly need mention - I hope! - that the cuts took place in different establishments).
The kids are happy with theirs, and the Dog is happy with everything, especially if it comes with cheese.

I, on the other hand, had my hair cut on my birthday, and it is only now - some 8 weeks later -  that I am able to talk about it without weeping uncontrollably.

It was not, as you've probably gathered, a good cut.


It was, without doubt, the single worst haircut I have had since my mum went at me with the 'Feathering Comb''.
This was, to those unfamiliar with the terrifying device, the Seventies equivalent of having your hair ripped through with a semi- blunt razor blade attached to a cheap plastic comb.
What am I talking about?  It wasn't the equivalent - it was exactly that.
A quick Google search has revealed that these things are still available to the General Public (presumably modified since the savage 70s).  Sometimes listed as Razor Combs and often available from Pet Grooming Supply stores (!)
Anything you want to say, Mother..?

What slightly freaked me out about this bad birthday-haircut was just how much it affected me.  I was actually depressed - and I've never been especially precious about my hair (as anyone who's ever seen me would confirm).
I couldn't bear it if I caught sight of my reflection and there was - literally - nothing I could do with my hair to make myself feel presentable.
My days were coloured by the dismal feeling I got from this one haircut.

When I returned to my hairdresser for a re-do, he confessed that he'd done two other ladies' hair on their birthdays - and had both of them in tears too!

I had to ask  -
Is it something about women (and their hair) on their birthdays?
Do the planets somehow conspire to torment us, to reflect the trauma of our birth through the medium of our hair?
Is it just my Hairdresser?  Or Hairdressers in general?

Then I wondered if this is some kind of Lore that ought to be as familiar to people as 'Red Sky at Night, Shepherds' Delight', or 'Never eat Oysters . . . ever'?

Should we produce a mnemonic in order to prevent other Birthday Hair Disasters that we can pass down to our children and our childrens children? 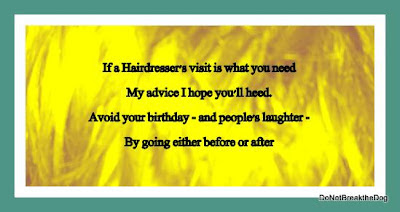 or the equally memorable . . .


I'm beginning to wonder if the Old Testament story of Samson and Delilah has been misinterpreted.   Seemingly Samson was able to kill a lion with his bare hands and defend himself against 1000 Philistines - as long as he never cut his hair.
But once the treacherous Delilah got her paws on his barnet and had it all chopped off, he was weak as a kitten.  But was his strength tied up (not literally) in his luscious locks?

Or had he simply lost the will to carry on, once he saw how ludicrous he looked?

After my experience, I would not be surprised if this was indeed the case.
Posted by Do Not Break The Dog at 18:28