IT MAY BE NOVEMBER...BUT REMEMBER, REMEMBER... 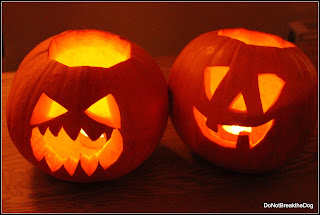 I know, Hallowe'en has been and gone - and, in England at least, most people have moved on to Bonfire Night preparations - but I can't resist dragging it out a little longer.

It's been a busy week with all The Family home, and certainly our most Time-Consuming Project was the Haunted Gingerbread House.


What a marvellous idea, eh?  Witch's fabulous Hydrotherapist came up with that particular gem, after getting herself a Fairy Tale House kit from Lakeland for Christmas.
We went for the cutters set, which came in a leeetle cheaper at £4.99 - and I'd say it was worth it for the gingerbread recipe on the back of the box alone.  It turned out to be bloomin' delicious.

The cutters worked really well, but I didn't have any baking parchment to cut the gingerbread out on, so I had to lift the sticky, flaccid shapes from the work surface to the tin, resulting in some fairly random edges. I was concerned they wouldn't fit together, but I needn't have worried - it seems pounds of Royal Icing is quite an effective Deep Hole Filler.  Although I can't vouch for its efficacy on any orifice other than in a Gingerbread House.


The whole project took us around 5 hours (felt more like 10) - thanks mainly to being 'helped' by Children Nos. 2 & 3.  (I have mentioned the Joy of Cooking with Kids before, here).
So, rather than having to set aside the whole of advent when it comes to the Christmas Gingerbread House, methinks I will get everything prepared beforehand - and the kids can do the decorating.

I cannot deny it was fun to make - and to demolish.  We decided an Assault by Nerf Gun was the order of the day ...


... but hadn't reckoned on just how strong a structure we had built.
So we resorted in the end to slightly more rustic methods. 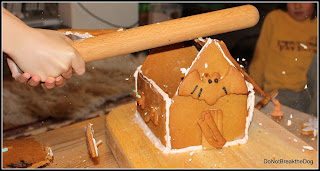 My, we came over all creative (as well as destructive) this holiday.  No.2 son had the great idea to make some bats.  And so we did...

But, it hasn't all been fun and games - I do have some sad news to report.

A photograph revealed in my Easter Visitors post showed the attempted murder of the Easter Bunny.  Well now, I am afraid to say, the job has been well and truly finished off.


Not sure why Witch took against him so.
But I can't be angry.  Not when she looks so darn cute in her Hallowe'en Bandana... 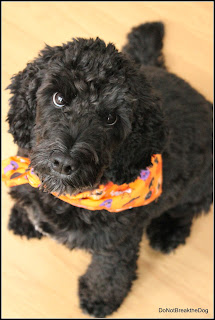