THE NIGHTMARE BEFORE CHRISTMAS..? 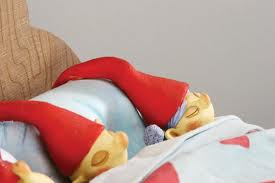 It was Christmas Eve-Eve and I was woken by a nightmare.
A really sinister, dark and scary nightmare.  It was Surrealistically Realistic - in that it was definitely odd and entirely weird but somehow plausible.

Anyway, I won't go into Dream Details as, although I find my own deeply fascinating, I recognise they are dull as ditchwater to everyone else.

However, it is fair to say that I woke up thoroughly spooked by Elves.

Being fairly grown-up I was able - after making Mr W listen to a blow-by-blow account of my nightmare - to lay the nastiness to rest.  Also we had family coming to stay, a turkey to collect and hoovering to do - so there was no time to wallow.

And indeed I thought no more of it.  The days fair hurtled by and on the early evening of Christmas Eve we took the kids to a nearby Garden Centre for an Ice Skating Session.
Kids Nos.2 and 3 had their first taste of ice skating last Christmas at the Brighton Pavilion and, for some reason hanging onto a barrier in the pouring rain while their feet skidded out from under them fired up an enthusiasm for the sport.  Since June this year they have been having weekly lessons and it has been money and time well spent - because they looked epic gliding around the ice.


And the rink was really quite festive as long as you focussed on the piped Xmas music and the twinkling lights ...

... and not the empty plant pots and concrete slabs.


The Skating Session was for 45 minutes and, in the way of 9 year old girls, No.3 decided after 35 minutes that she needed the loo.  Couldn't wait.  Had to go now.

So she came off the ice (as you would hope), fitted her Blade Protectors (oooh swanky) and we wandered off to find the Ladies'.

The Garden Centre by now was nigh on deserted and it was huuuuuuge.
The quiet was humming in our ears as I looked around for any signs of life let alone loos.
To our right was a darkened Santa's Grotto and to our left was a wall of industrial looking doors.  Entirely focussed on the job in hand I squinted along the vast length of the building and, finding nothing, turned sharply on my heel ... to come face to face with a six-foot elf.

He flashed a dark, shark's smile and said ...

"Oooh hello!  Can I help you?"
Had the poor chap known about my dream he would have understood my reaction.
Which was to scream loudly and run away.
Followed at an impressive rate, considering she was wearing her skates, by aforementioned Daughter Aged 9.
﻿
﻿
Posted by Do Not Break The Dog at 08:43