This week - look at me jumping straight in there, no shame I tell you - I did a most exciting thing.

You may have to use your imaginations a bit here because I can understand that, although it was very exciting to me, it may not be everyone's idea of a thrill...

This week I took myself off to A Talk at the Local Historical Society.  Yes, A Talk.  How grown up is that?

It was with great excitement that I noticed in a glossy flyer that plopped into my entrance vestibule, that 'British Resistance in World War Two' would be debated.  It even had words like 'Dad's Underground Army' in the blurb.  How could I resist?

Well I couldn't, is the short answer.

Now I have read and watched an awful lot about World War Two - The Resistance (in occupied Europe) and S.O.E. especially.  But I have only ever seen one television programme about this English 'Underground Army'.  So, I hardly need tell you, off I went.

The night was dark and cold, and the crowded room that we all ... crowded ... into was a teensy bit musty smelling - but nothing would dampen my spirits as I awaited the The Talk.  I may even have been jiggling a bit in my seat. In fact I definitely was.

Well shucks it was every bit as good as I had hoped.  The speaker, Bill King, was fascinating and enthusiastic, and every bit as thrilled by the subject as I am.

I force myself to remember, as I read about the Home Front in World War Two, just how close to invasion we came.  Of course those of us born after the war watch or read about events knowing how it all turned out  in the end; and I think it's easy to forget just how terrifying and real the threat of invasion was for people in England*.
There was no reason why Nazi Germany wouldn't invade.  They'd torn through Europe and were, after all, only 21 miles away from our shores.
A chill went down my spine when, on one of the slides were were shown, the Operation Sea Lion** Invasion Plan showed that the area I live in was designated a Paratroop dropping zone.
Not much could be done about hundreds of armed, trained soldiers dropping from the skies when all the locals had to offer were a poorly-armed  Home Guard  with little more than makeshift weapons and perhaps a turnip to offer as resistance. 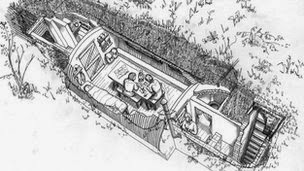 And that was when the Underground Army (under the banner of Auxiliary Units) would move into action.  Top Secret Cells of men, between about 4 and 8 in number, would walk away from their jobs, their homes and their families and would disappear.  Literally underground.
Concealed, underground Operational Bases had been built and equipped with rations (including a barrel of rum) and the latest weapons and sabotage equipment.

Areas at most risk of attack had priority for these bases - mainly the South Coast of England.  I was totally thrilled to discover recently that Tottington Manor in West Sussex was the Regional HQ for the Sussex Auxiliary Units - complete with bunker and secret tunnels underneath.  But why, I hear you ask, should I be excited so particularly by this news?  Because that's where I got married!  Yay me.
But I digress ... 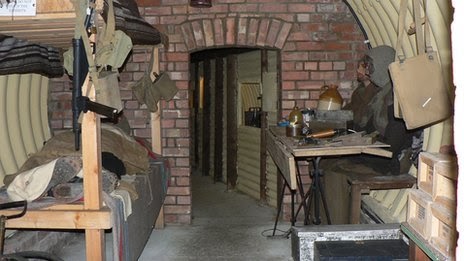 Men considered suitable had been recruited mostly from the Home Guard, but also from the Scouting Movement.  Their talents had to include excellent local knowledge and an ability to live off the land.  Their role was, in the event of occupation, to attack behind enemy lines to cause as much chaos as possible.  Their targets being railways, aircraft, fuel dumps etc.
Each cell would be self-contained and self-sufficient and the men's life expectancy was a sobering two weeks.

The recruits undertook secret training at Coleshill House (now in Wiltshire but at the time - before county boundary changes - in Berkshire).  They were instructed to go to the Post Office at Highworth, Wiltshire, where they were to give a message to the Post Mistress, Mabel Stranks.  She would then make a call to General HQ informing them that someone was ready to be collected.
After collection, the recruits would be taken - by the most indirect route - to Coleshill House for training in assassination, unarmed combat, silent kill, demolition and sabotage. 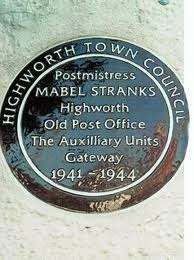 My memory is shocking and I can't possibly do justice to all the fascinating information there is on this subject.  Luckily people greater than I have prepared websites and written books on the subject.  Perhaps give these a try to start with?


As always, when I think about Resistance in the Second World War, I find myself wondering - Could I have done that? Would I have been remotely brave enough?
I think perhaps not.
And maybe that's partly why I am constantly and consistently  amazed, impressed, enthralled and humbled by the extraordinary ordinary men and woman who were.

*Of course the inhabitants of the Channel Islands know all too well what Occupation felt like.
** The codename for the invasion of Britain.
Posted by Do Not Break The Dog at 14:54