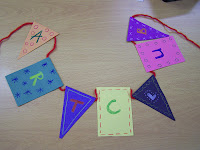 Yes, after-school Art & Craft Club has started up again (I took a break after Christmas due to family commitments) and our first session was on Tuesday afternoon.

I was quite looking forward to it, a new batch of 6 victims children eager to express themselves through the medium of whatever I bung on the table.

Trouble was, this week turned out to be rather more miss than hit.
As it was a brand new group, I decided to keep things simple so I could get a feel for the mixed range of abilities.   I had fond memories of drawing with wax candles as a child and then covering it with a wash of paint.  I still think it's epic now, watching the invisible wax drawing come to the fore, as if by magic (it's true, I don't get out much).

So off I went to school, spring in my step, song on my lips, unfeasibly heavy Craft Bag hanging from the crook in my arm...

Now, I don't know if it was the paper I had, or the candles we were using, or if the water to paint ratio was all to cock - but goshdarnit those gloriously ghostly wax drawings stayed resolutely invisible.

I felt so bad for those young artists who came to my club expecting to do Arty Stuff  and all they got for their trouble were (very damp) pieces of painted paper.
I felt pretty bad that the clock was suggesting we still had 30 minutes to go until pick-up time too.

But the kiddies didn't seem terribly bothered, bless their little hearts of gold.
"Why don't we make fingerpaintings?" suggested one.
The idea was embraced by one and all almost instantaneously, and I smiled indugently as they all made colourful little dots on their paper.
Then they moved onto handprints.  Okay, still good, we have a sink they can wash their hands in before home time.  Gradually the handprints got a little more sinister,  and big and wet and splodgy and not entirely confined to the paper.
It was when one bright spark suggested seeing how a face-print turned out that I was finally shaken from my reverie and forced to intervene.

Like sharks getting a whiff of blood...those previously golden hearted children smelt my fear and decided to capitalize on it.  I had no idea (and bear in mind I have 3 children of my own) just how much mess 6 pots of paint can make.  I do, however, have a very good idea of how long it can take to get paint out of school unform so I had to woman-up a bit and deal with the situation before it got totally out of hand (or face).

Eventually I got everyone to stop what they were doing until we'd cleaned everyone's hands and arms (and in one case back of the neck) and calm was restored.

Until they discovered the Musical Instrument Trolley.

They were entirely fascinated by the instruments (as children always are) and wanted to toot and beat, and pluck and shake all of those enticing goodies.

How nothing was left with painty fingerprints I will never know (the Patron Saint of Parent Helpers must have invoked a magic charm) but it did give me an idea. . .


So, next week we will be making Rainmakers.

No, not those ones (seen enough of those over the last couple of weeks). 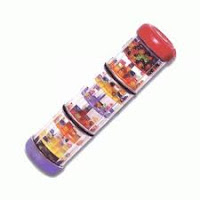 The musical instrument ones, (similar to the plastic toy one I have helpfully inserted a picture of above).

Only ours will have much more in the way of paper towel inner rolls and lentils about them.

I'll let you know how we get on (which punctuation marks do you use to depict a nervous smile?)
Posted by Do Not Break The Dog at 21:10