Now I really wouldn't want you to think that I go around eavesdropping, because really I don't.  Although ... there is a lot to be said for being 'aware', I always say.
(It comes from reading so many books about WWII Resistance and the S.O.E - but more on that later).

It's just sometimes you don't so much 'overhear' things, as have them thrust upon you. . .


I was recently in a Hospital Waiting Room...waiting for The Husband.(Sometimes known as BB, but am currently auditioning different titles for him).

- I seem to start a lot of posts with Hospital Waiting Rooms.  Anyway....

There I was, minding my own business, deep in the pages of my current book about WWII when in came a couple (a man and a woman) who were really rather pleased with themselves.
Lots of hair-flicking and teeth flashing and effortlessly shabby-chic clothing.


I am afraid, Dear Reader, I did take an instant dislike to them.

They were so very loud, you see, and this was not a large room we found ourselves in.
So very loud, and so entirely thrilled with themselves that I imagine they thought everybody else would be too.

Then I thought, now Stoppit Kate.  Seriously, Stopppppppit.
I am sure they are perfectly lovely people.

So I smiled at them - and they blanked me.

So I carried on with my book.

They sat right next to me (they had no choice - like I said - not a large room) and conversed together employing the kind of voice projection last used by Larry Olivier at the London Palladium.
During the Blitz.

I tried to continue with my book and wondered (being of a mostly charitable bent) if perhaps they had Hearing Issues.
I didn't really think that.
I thought, Will You Please Shut the *%*$* Up, I'm Trying to Read My Book.

Apparently I still don't have the gift of Mind Control because they continued in the same vein.

I am now fully up to speed with the New Phone Tamsin has been Trialling and their Renovation Work.

I had to assume that they didn't mind who heard their conversation and, since I could no longer concentrate on the printed word, I closed my book and just sat there.

THEN they started talking in whispers. 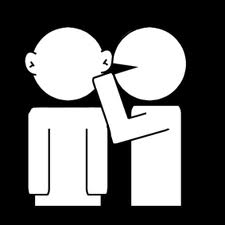 I had to wonder - Did my reading put them off whispering before?
Did they have to shout to be heard over my exuberant page-turning?
I felt somehow responsible...

But the whispers didn't last.

Banging on and on,  they went.  All about their renovations and how they were 'in charge' and how Michael (no idea) really ought to remember that.  How concerned they were about How Many Skips They Should Order.  He thought two, but Michael (still no idea) says One Is Enough.  But you get a Better Price for two - and if they order one and it turns out they do need two...and on...and on...

Then the woman checks her smart phone, or android, or whatever the Sam Heck they are, and says,

"Oh no!  Your uncle was mugged at gunpoint last night and forced to go to the bank to withdraw money!"

Then the woman says, in a soft, concerned voice,

"Are you okay baby?"

Bit of Reassuring Squeezing of Thigh and then,  "Are you worried about your uncle?"


"I was just thinking about that skip."


And there you have it.