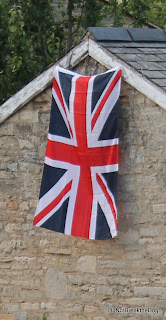 Bunting Fever!  I've totally got it.  Actually, I have always had it -  but I have well and truly taken advantage of the Diamond Jubilee celebrations this (long holiday) weekend and bedecked the homestead with  small pennants of red, white and blue.


I got really caught up in the celebrations too.  Not as in dressing as a Pearly Queen, hauling my derriere to London and declaring a lifetime's devotion to the Crown - but in a quiet appreciation (which I suppose is quite British in itself).
Not just of HM the Q, but of Britain too (ooh, a poem!)

We were lucky enough, where I live at least, to have a couple of weeks of gorgeous weather in the run up to the Jubilee Loooooong Weekend.   Union Jack bunting flapping against bright blue skies would surely put anyone in a jubilant mood?

And that's not all.


Everything in the shops has been appearing bedecked with the Union Jack (yes I believe it is officially the Union Flag, but Union Jack sounds much more jolly and almost Pirate-ish, which appeals).
Clothes, biscuits, malt loaf and marmite - renamed "ma'am-ite" for a limited period - have all appeared swathed in our flag's colours.    And it has made me feel really quite patriotic.


My two younger children spent the last day of term enjoying a British Day with the rest of their school.  Every child was asked to bring a specific thing to eat or drink to share in their 'Street Party'.  ( I saw people dropping off muffins and fizzy drinks in the morning.  I was allocated cheese sandwiches and celery sticks.  I think they are still there).

The day was also spent  doing "British Things" like Tug of War, a Coconut Shy, Maypole Dancing and . . . ahem . . . cheerleading.  Staff and children dressed either in Red, White and Blue or as a member of the Royal Family - and the overall effect was incredibly moving.
After a display in the school hall for the parents, we all stood to sing God Save the Queen and I was darn near finished off.

And it struck me how important a figure-head can be.  A focal point around whom we can all gather and share at least one thing in common.  Goodness knows there have been some sticky times in the not too distant past, and I seem to remember the Golden Jubilee being somewhat more low-key, perhaps as a reflection of that.  But watching the River Pageant on Sunday afternoon, when the Queen and her party stood for AGES in the chilly June weather and incessant rain (unfortunately the weather broke just in time for the weekend) to acknowledge the seemingly endless parade of boats, brought home to me just what Elizabeth II does for us, as a country.  Steady and quiet devotion to duty for the last 60 years. 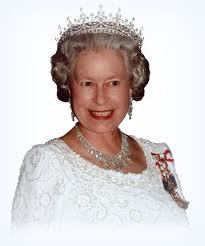 And then we hear that Prince Phillip has been taken ill and can't be by the Queen's side for the rest of the celebrations.  Does she waver?  Does her face betray any personal feelings of disquiet?  Not a bit, bless her.

Whatever your feelings about the Monarchy - this kind of display of professionalism must surely be admired.  Mustn't it?

It was pleasing to take a moment's pause and consider what we are a part of.  Our Royal Family have had some fairly serious hiccups in the past (like many families).  But they seem to have come through it, and I think many of us have high hopes for Prince William and Princess/Duchess (what are we supposed to call her?!) Kate.

It's so easy to get caught up in what's bad about living in Britain, and recessions are unsettling to say the least.
So I reckon it would be a Good Idea to celebrate being a part of Britain, and all its triumphs.
We could do it every year at around this time - while the kids are still at school and the weather might be kind.

We all belong - no matter where we were born.  Britain is where we are, and there is a lot to be proud of.

Let's teach our children more about Britain's history - of the great men and women who have shaped, and are still shaping, our country and our lives.
(If you strain, you might just hear 'Land of Hope and Glory' playing...)
About old traditions - some may have died out, but plenty survive.
We should even teach them about the embarrassing bits - like Morris Dancing :-)  - because it all adds up to where we are, here and now.
It's a history we can all share. And a flag we can all unite beneath. 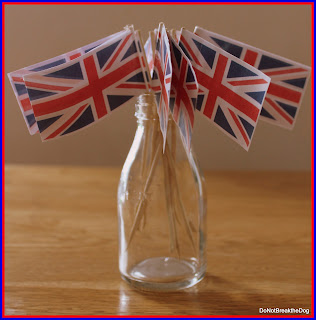 P.S.
To My Beloved Readers in other countries - Do you already have your own days of celebration?  Please tell all - I'd love to know  x