I Will Never, Ever, Garden Again... 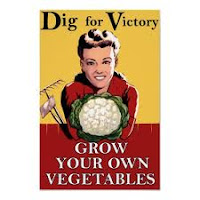 I have never been much of a gardener anyway...

...Unless you count that one year when I had a thriving vegetable plot.  But that was very much a 'Dig for Victory'  WWII fantasy I was living out, coinciding with the 50th Anniversary of VE Day.

No, Gardening and I have always been Uneasy Bedfellows - I don't do creepy crawlies, damp earth, dry earth, hard work, bugs ...  Also, it makes my skin itch.  Not sure if that's psychosomatic or an actual allergy to something - possibly the 'hard work'.


﻿
Not far into the project and I had already been traumatised by the sight of some weird Tiger-Looking Bugs (hairy with orange and black stripes).  But I Toughed It Out and carried on hacking.


In my vigour, I decided to go a bit deeper than the new, strandy growth that was poking out in all directions.  Just by the shed window was a big old hunk of dried-out, gnarly clematis stuff.  I grasped the dead bit with one begloved hand, ready to go in with the secateurs when ...

I was assailed by beating wings and squawking beaks and a series of thumps - as at least a hundred (not that many) baby Blackbirds hit the patio.

Oh Sweet Henry, what have I done?  There was a NEST in there!

Everything happened so fast.
The Dog, as ever by my side,  immediately attempted to RETRIEVE the little fledglings!

Luckily, Mr W was on hand to salvage the situation.  He leapt into action (as opposed to into hiding, like me), removed The Dog and re-homed the fledglings.
I say 'fledglings' - by now only one was visible and No.2 Child maintained there had been 'at least six'.


So the Hunt Commenced and everyone got involved.
Except me.  I stayed indoors - gibbering my apologies to the birds.

One more was found, and then another was repatriated via our Next-Door-Neighbour.
No stone was left unturned as the quest continued.
In all, three were popped back into their nest.

And out they all popped again.


One beetled off towards the shed, and the other two were busily bouncing around between the plant pots. 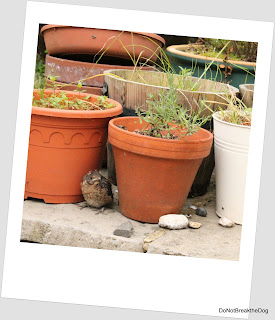 Once again, they were caught and gently put back into their nest.  But they were having none of it -and leapt out as quickly as Mr W could get them in.

It was decided that putting them on a towel in a wooden box (no lid, don't panic) would be the Best Thing.  At least they wouldn't hurt themselves falling out of their nest.
So in went the two we could find and we evacuated the garden so that the third might put in an appearance.
This brief hiatus gave me the opportunity to look online (how fab is the interweb?) to see what we should do.

On no account should we touch the birds.
Ah...

Reading on, it did say it was acceptable to move them to keep them out of harm's way.
I think Potentially Retrieving Dog probably counts as 'harm'.


But since The Dog was now safely locked indoors, we took them out of the box.

I also read that, between April and July, fledglings routinely bounce out of their nests, and the Mother Bird will carry on feeding them on the ground.

Phew.  So we're in the clear.
As long as we pretend we never touched the birds in the first place.

Later that evening, we watched from the window as Mother Bird gathered her chicks and marshaled them to stand by the garden wall.

There they stayed, bless their little hearts, until next morning - when, having to go to the shed for our morning milk, I tiptoed past them, hoping not to devastate their little lives still further.
In the doorway I heard a noise.   A quick glance to our birds still glued to the wall ruled them out as the source.  Mr W, who was watching The Dog to make sure she didn't harass the birds, confirmed that no, he had not made a sound 'like wings beating'.
Third Bird was in the bloomin' shed!

Once again, Mr W came to the rescue and ushered our Feathered Friend out and into the warm embrace of his nest-fellows by the wall.
Except they both just bounced off to hide among the plant pots again.

We declared the garden Out of Bounds to Human and Hound until the little birds had sorted themselves out.

When I got back from the school run, Mother Bird was busily bashing her way into a snail, so I went upstairs to change the boys' bunk beds before taking The Dog for her Hydrotherapy appointment.

Reflecting on the havoc I had wreaked upon an innocent family of birds, I scooped the collected detritus from the top bunk when my hand fell upon something soft and fluffy that MADE A DISTRESSED CHIRPING NOISE!
I jumped from the ladder with a screech . . . as No.2' Child's black Angry Bird toy bounced down beside me. 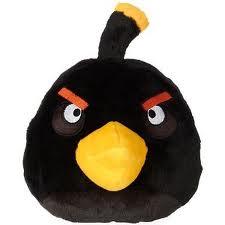 But I broke out into a cold sweat nonetheless.

I'd devastated a family's life.  I should bloomin' well sweat.
(There could be some hormones at play here too.)

Now, some days after Garden-gate, I am happy to be able to report that all the little birds have flown.

Mother Bird obviously did a good job teaching her chicks.


And I learnt something too.


The RSPB has loads of advice on its site, including the following:


"We recommend that cutting hedges and trees is avoided between March and August as this is the main breeding season for nesting birds."

Wish I'd seen that before...