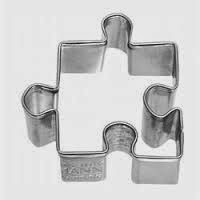 It is not that I dislike Jigsaws because I can't do them.  There are plenty of puzzles I can't do but still like. 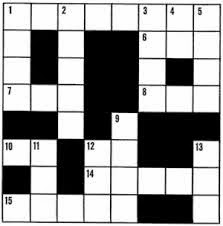 Cryptic Crossword Puzzles My only experience being The Telegraph newspaper's offerings and I confess that Mr W 'helps out'.  (In as much as he tells me a lot of the answers and then is sweet enough to add that I 'would have got there' without help).

Bletchley Park/Enigma style codebreaking - For some reason I am convinced that I would be able to crack the German Luftwaffe's code.  Never mind that the limit of my German language skills is asking politely the whereabouts of the tram stop, and relating the legend that Lumpi is my dog - even though he isn't.  Oh hang on... I can also tell you my leg is broken and that Fritz is ill and, for some reason, I know how to say 'a letter from America' - handy if I wanted to join in with a bunch of           German Proclaimers fans.

But why am I telling you all this?

Well today I witnessed another puzzle - and I love it on the one hand and hate it on the other.

I left Woozelbears (where the Do Not Break the Dog dog has her hydrotherapy sessions) and did - I kid you not - a 15-point turn to extract my car from its parking space.  Even then I ended up facing the wrong way.  When I managed to get back on course I found myself witness to a curious scene indeed ...

The trading estate where Woozelbears can be found is home to a ripe old mixture of businesses.  There is a Snooker Hall (which is very protective of its parking spaces), a Brewery, a Sign Printers, a Catering Equipment Suppliers and a Business I Cannot Determine but they leave lots of different mugs out on the wall, along with a variety of cigarette stubs and empty beer bottles.  (Coffee...fags....alchohol....it's surely not a school?)

Anyway, there is also a Take-Away Indian Cuisine Emporium.  I never see anyone come in or out, but often my nostrils suck up the glorious aromas that waft out through the vents.  Well on this day (today) I did see someone come out.  A gentleman wearing chef's whites and a blue stripy apron.


He had quite a saunter on the go and I thought, 'he's probably off for a fag break with the lady who works in the second-hand bookshop'.  Nothing passes between them except the social niceties of the day, but they both take their breaks at the same time each day hoping to bump into each other.  (I made that up).

So he's Sauntering Jauntily when another gentleman appears, dressed similarly only with copious, what I can only assume is turmeric, stains on his chef's whites and he is brandishing a bicycle.
And I do mean brandishing.


He is holding this bike (he was a big man) above his head while Shouting Angrily at Sauntering Jauntily.
I could not hear what he was saying because I had Radio 4 on - so the action unfolded to the soundtrack of Woman's Hour.  Sometimes it would be useful if life came with subtitles.

Then, Shouting Angrily threw the bicycle down with such force that several parts of it came off and skittled around the car park.  Sauntering Jauntily carried on walking away, with a look of amusement on his face.
I'd turned the radio off, but still couldn't hear what anyone was saying.
By now the lady from the Catering Equipment Suppliers had come out to see what all the noise was about (presumably they don't have Radio 4 on in their shop).

Shouting Angrily picked up the bike again and threw it down, only this time with a little more force.  More bits broke off and bounced away.  He then repeated this manoeuvre at least twice.  As I watched the bike being gradually destroyed it struck me how futile it had been for the bike's owner to protect the bike's saddle from rain that day with the careful use of a supermarket carrier bag.


Anyhoo, as I left the estate, Shouting Angrily, who had initially left the broken bike in the middle of the roadway but clearly is a thoughtful gentleman because he then put it to one side to allow traffic to pass, had gone back into the Take-Away Indian Cuisine unit.  As I made my way in my car to the main road, I saw Sauntering Jauntily milling around in the middle of the road, removing his stripy apron and bundling it up.  He no longer looked amused.

Naturally I took a totally unnecessary detour so that I might get some resolution to this puzzle. 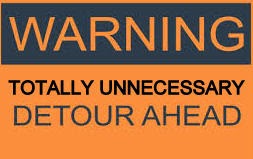 I JUST DON'T KNOW!  And I kind of love imagining what could have caused it all.  But I also hate not knowing.

It's a puzzle, and no mistake.